In 1662, Robert Boyle was the first to describe Decompression Sickness (DCS) observed in the eye of a viper and to demonstrate that “reduction in ambient pressure could lead to bubble formation in living tissues” [1]. From this moment, it used to be thought that decompression sickness occurred only to high pressures workers or scuba divers. The great amount of compressed nitrogen (N2) that dissolves in their tissues exposes them to the risk of incorrect gas desaturation when going back to normal ambient pressure. Lot of progress has been done in the last century, which made recreational and commercial diving reasonably safe: decompression tables, saturation working, gas mixing variable quantities of oxygen or helium.

But it is only quite recently in 1965 that Lanphier put forward that DCS could also affect freedivers if deep repetitive dives were separated by short surface intervals [2]… Statistical follow-up of DCS in BH diving is still not available at country level of from insurance companies and yet, over 140 DCS cases concerning BH divers all over the world have been described and studied in the last 50 years [3] by travellers, ethnologists and physicians.

Science on this subject remains quite young. Some rules to decrease DCS risk have been expressed, but they seem mainly theory-related and might not take into account the specificities of really different BH activities like spear-fishing or competitive BH diving (later referred as ‘freediving).
In this review, we will thus study the eventual differences with risk of occurrence, symptoms, prevention and treatment of DCS in these two main activities, after a brief introduction on how DCS can affect freedivers.

How freedivers can develop DCS?

Changes in pressure affect compressible substances in the body among which lungs of the freediver, filled with air from his last breath.

Even if applied to a smaller amount of air, Dalton and Henry’s law still apply as depth and pressure increase during the dive. Partial pressure of nitrogen increases, gets higher than its natural saturation level in tissues when at the surface, and thus equilibrates through the alveoli into the blood. As the freediver ascends, nitrogen saturation will tend to equilibrate back to surface level but as gradually as it built-up.

The amount of nitrogen thus dissolved in one single dive is small, and will be completely released after some time spent breathing at the surface. But with repetitive dives, small surface interval and fast ascent speed, increasing amounts of nitrogen will gradually dissolve and accumulate in the tissues. When significant level of nitrogen is dissolved, it can return during ascent to its gas form while still in the blood or tissues. The bubbles formed will cause various decompression sickness symptoms depending on their size and location.

What are the factors impacting risk of DCS?

“Dr. Paulev in 1965 calculated the nitrogen in his tissues after repetitive breath-hold dives. He determined that short surface intervals did not allow tissue nitrogen to be eliminated and thus it was equivalent to that resulting from a continuous dive.

Further studies by Dr. E. Lanphier indicated that the ratio of surface time to dive time and the rate of ascent were important factors in the development of decompression sickness from freediving” [4].

From these original works and the following ones since today that constituted current knowledge on DCS we can identify the following main factors impacting the risk of a diver suffering DCS:

The following factors, sorted by order of importance, need also to be considered:

Even if these two activities rely on the same challenge – hold your breath as long as possible – they are two really different sports with different objectives and thus different outcomes regarding risk factors previously identified.

During a classical training session, a freediver will look for performance improvement or maximum performance through efficient training, relaxation and comfort: 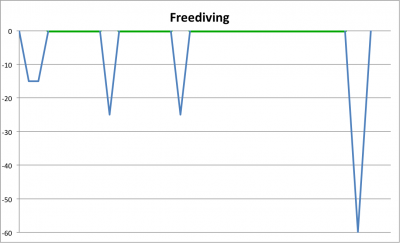 As spearfishers objective is different – catch as much fish as possible – their session profile will be different: 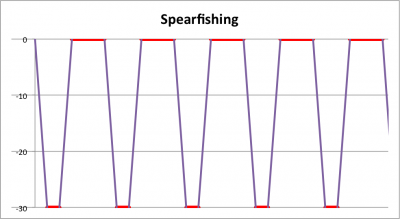 Regarding ascent speed and dehydration factors, athletes face the same risk in both disciplines. Both populations can also present fitness or age issues. These factors are thus not discriminant.

Are there different symptoms predominating in each discipline?

DCS symptoms are usually classified in scuba diving in 2 types based on their severity:

We collected the following testimonies:

– Eric Fattah in a discussion about new theory about risk in freediving (dcs/airtrapping) on Deeperblue.net [5]:

“Since July 2005 I have suffered freediving DCS at least 7 times. On the worst occasion I went into the recompression chamber. Upon entering the chamber and going to 18m on 100% O2, my symptoms disappeared. This year I was doing nothing but FRC diving, starting each dive with about 4-5L of air. I still suffered DCS at least 4 times (i.e. NO packing, not even full inhale!)

When I had DCS, the symptoms I had were:

– An experienced spearfisher that we interviewed on the 4th of may 2011 described the following accident, followed by physician B. GRANDJEAN from hyperbaric medicine department of Miséricorde hospital in Ajaccio, France:

Context: 3 consecutives weeks of spearfishing with a rest day each 3 or 4 days.

Other factors: warm water temperature (24°) with adequate thermal protection, regular hydration before during and after sessions, perfect fitness (36 years old, athletic, trained), but important tiredness after sessions requesting 1 hour resting once back on land.

The diver fell unconscious when arriving to surface after a violent effort at 48m to catch a big fish. Still unconscious but breathing he has been evacuated by helicopter to the hyperbaric chamber of Miséricorde hospital in Ajaccio. Coma lasted 25 hours during which the diver has been recompressed several times.

On the advice of his physician, the diver now practices 15 minutes of active rest at the surface per hour, and reduced maximum depth and number of repetitive dives.

– Dr Heikal, GP Specialist in Hyperbaric Medical Center of Dahab in Egypt, reported during our interview the 22nd of April 2011 [6] the 2 following cases:

In 2006, he checked a world-class freediver the day before a record attempt over 180m in No Limit discipline. The freediver was clinically fine.
He dived the next day to 182m during 5 minutes and came out with improper balance. He has been directly transported to the hyperbaric chamber. The patient was talking monotone, could not walk unassisted, and was getting worse with the time. He received saturation tables twice a day during 2 days (the patient is compressed to 18m breathing pure oxygen and then pressure is reduced to shallower depths during 7 hours) and showed only marginal improvements. Dr Heikal considered these symptoms as really unusual compared to the 90 scuba diving DCS cases treated in Dahab.

In 2007 a diver with a personal best around 85m did a dive of 2m30’ at 80m and came back with muscles weakness one side, and loss of feeling on the other side. As the freediver’s face was completely ok Dr. Heikal suspected mid brain lesions. A MRI of the patient brain has later confirmed his doubts.

Considering the marginal improvements of symptoms with hyperbaric recompression in one case, and the unusual symptoms in both cases, Dr. Heikal opinion is that freediving DCS symptoms also mix with possible brain damages due to hypoxia which are more likely to affect balance center, and with hypercapnia, which could result according to him in increased brain damages.

So regarding to most frequent symptoms in freediving or spearfishing, more examples and further scientific studies would be needed to allow us drawing any conclusion. In the review of Decompression sickness in breath-hold divers by Lemaitre, Fahlman, Gardette and Kohshi, the authors even assumed that these two divergent dive behaviours may result in similar symptoms through different mechanisms”.

How to prevent DCS?

They thus should not be used as the only tool to plan dive sessions, and can be interesting to understand the safety principles behind DCS prevention.

Here a some other examples of freediving decompression tables:

In 1990, Dr. Nicolas HERAN published the following table in its thesis:

A representative of Oceanic and Aeris published in 2007 on Deeperblue.com the following tables [7]:

When using tables, divers may consider the following additional rules:

After analyzing series of DCS suffered on sometimes-shallow dives, or even on exhale dives, Eric Fattah concluded that the primary risk factor was the ascent rate. According to him, “ascending over 1.15m/s, especially in the last 10m, dramatically increased [his] risk of DCS. With ascent rates of 1.20m/s, [he] could suffer DCS after just two dives to 40m”. He then added apnea ‘deco stops’ at the end of each dive and adjusted his ascent speed: “I would ascend at 1m/s, stop at 10m, ascend very slowly to 6m, stop for 5-15 sec, then ascend slowly to the surface. Using this method, I have eliminated my DCS problems, despite doing ‘worse’ profiles than before”.

He incorporated a couple of deco stops on his 214m no-limits dive – one at around 70m for half a minute, and one at 30m for a full minute. His ascent speed before these stops was around 3m/s, and below 1m/s after the 30m deco stop.

Considering the other factors impacting risk of DCS, the below safety rules should also be applied:

Breathing 100% oxygen under higher partial pressure is the decompression method used in technical diving and in hyperbaric chambers (to higher partial pressures though thanks to the safety of environment). During decompression stops, a maximum partial pressure of oxygen of 1.6 bars is recommended by all scuba diving agencies. 100% O2 can thus be breathed at a maximum depth of 6 meters. A freediver breathing pure oxygen for 5 minutes at a depth between 4 to 6 meters at the end of a dive session would thus highly reduce his risk to suffer DCS.

In most freediving competitions oxygen is now available to divers diving deeper than 70-80 meters. It is used also on deep variable weight or no limit record attempts.

Whatever the origin of DCS, there is universal consensus that:

Freediving affects blood chemistry in different ways – hypoxia, hypercapnia, N2 saturation. And before a decompression model adapted to breath-hold diving can be found, further investigation is needed, mainly based on cases studies. In this matter, the lack of data is an issue. Because of lack of information, divers don’t necessarily realize they suffered DCS and so don’t treat or report it, as benign symptoms like fatigue, nausea, rash, light-headedness, can be easily confused with other health issues, specially if they go after a couple of days.

As regarding to freedivers and spearfishers communities, our review allow us to conclude that spearfishers present a higher risk to suffer DCS, mainly because of the number of repetitions, the significant bottom time combined with short surface interval, and the effort implied by their practice. However, athletes of both disciplines are equal facing DCS symptoms seriousness, and treatment is the same: 100% O2, hydration, EMS.

But the most important to remember is that ways to prevent DCS exist. Tables still need to be improved and checked, ascent speed is difficult to control, but other factors like dehydration, coldness, tiredness age and fitness can be easily monitored. Breathing 100% O2 at slightly higher partial than surface before getting out of the water is also a solution that can be easily organized in competition environment.

Finally, lot of progress on information and practice is still to be made: a recent poll concerning surface recovery time between dives on Deeperblue [10] showed that among 163 freedivers from all disciplines 83% would recover less than 4 minutes between dives, and 60% less than 2 minutes…